Head of DevRel at IoTeX, Simone Romano, stars in this series of lectures about the MachineFi methodology developed by IoTeX, in front of Prof. Zhenhua Liu's students of the Stony Brook University of New York.

Head of DevRel at IoTeX, Simone Romano, stars in this series of lectures about the MachineFi methodology developed by IoTeX, in front of Prof. Zhenhua Liu's students of the Stony Brook University of New York.

The first lecture of this series will focus on three main parts:

In this section, students are exposed to the core concepts of a blockchain as a distributed infrastructure, maintained by a decentralized network of nodes.

The structure of a "block", and the relationship between each block is looked at in more detail through a visual demo, while different consensus mechanisms, such as Pow, PoS and DPoS, are also explored.

Students are then exposed to the concept and role of mining in a blockchain network, and the most common uses of the blockchain technology.

By introducing the Oracle problem for blockchain applications, the MachineFi methodology, developed by IoTeX, is then explained as a way of incentivizing the deployment of machines, financializing the utility and data stream coming from machines, as well as enabling composable and transparent ways of building innovative applications.

More information about MachineFi can be found in the MachineFi Vision Paper.

Students are then walked through one of the core components of a MachineFi application, W3bstream: An off-chain computing infrastructure serving as an open, decentralized protocol sitting in between blockchain and devices to convert real-world data streams from devices into verifiable, dApp-ready proofs.

The architecture of a simple walk-to-earn application is then discussed: Verifiable data from an Arduino board is stored and computed by a single W3bstream node and then fed to a smart contract as proofs, to allow users to earn tokens for walking. 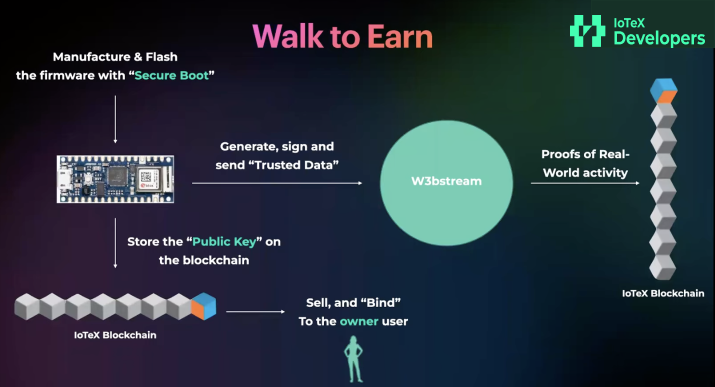 A step-by-step tutorial and the complete code for the firmware can be found on the IoteX Developers Portal in the Walk-to-Earn Workshop Part 1.

For more developer oriented content, tutorials and guides on MachineFi applications, feel free to check out the IoTeX Dev Portal.